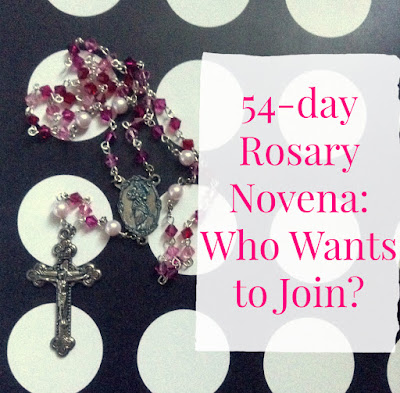 You didn't think we were going to forego this blog's annual tradition of doing the 54-day Rosary novena just because I've been dealing with dental and medical problems lately, did you? Nope! In fact, we (my mother and I) now have more of a reason to do it this year.

I was planning on announcing it earlier in an EpicPew article but since it's not gone up yet, I decided to blog the invitation while I wait for my editor to publish that article. (Edit: you can now read how to pray the novena on my Epic Pew article here.)

As usual, anyone who wishes to join us for the 54-day Rosary day novena may do so.  You don't have to pray for mine or anyone else's intentions -- you can focus on your own. However, if you'd like to give a sister a hand, I'd be incredibly grateful because y'all know how bad my health has been since June.

For those of you who want to join but have never done the novena before, here is the story behind the tradition which I posted last year:

"A couple of years ago, I started inviting Twitter friends to join in on praying the 54-day Rosary novena when I prayed it. There's strength in numbers, right? I didn't ask them to pray for my own specific intention; I left it up to each person to pray for whatever massive intention they had with the option of adding the intentions of everyone else praying the novena. It went well so I did it again the following year and I invited blog readers to join in. To my surprise, many did join in and the number of people praying the novena grew that year... and the year after that... and the year after that, etc.

Last year we had the biggest group of prayer warriors since this tradition began. To this day, I still get messages about the amazing graces and answered intentions following last year's novena.

As per tradition -- and as recommended -- we'll begin the novena on All Saints' Day and end on Christmas Eve. If you do the math (and I have), it's exactly 54 days between All Saints' Day and Christmas Eve so, you know, perfect timing! This novena is recommended for intentions of all sizes and severities. I will also be offering to send you a daily reminder you need one -- either through Twitter, the blog's FB page, a text message (if we already have contact outside of social media), or an email.

Of course, I'm also going to throw the annual word of caution: this novena is not for the faint of heart. Many people (myself included) have experienced what I call a "Murphy's Law streak." If something can go wrong, it's likely that it will go wrong. That's not to say that everyone will experience it. I've known people who've had no problems during it. Mom and I had just one minor hiccup during one of them. I've also known people who've only seen the good that has come from the novena. Still, I know there are people who've abandoned the novena because they've gotten overwhelmed with the obstacles they've encountered while doing this novena. The graces have always outweighed the bad (in hindsight) and if you have a huge intention that you really feel stuck on, I cannot recommend doing this novena enough.

Please don't let what I've just warned scare you off. I'm only informing you that this novena can really test someone so that you're prepared if you want in. But, you should also keep in mind that that's what the devil wants. He doesn't want you to pray for our Blessed Mother's intercession, especially for a big intention. He'll put obstacles in your way... but God is greater and Mama Mary will always crush his head. Keep frequenting the Sacraments, constantly invoke our Lady's protection, ask your Guardian Angel for some angelic backup, and you should be fine.

Having said that (and having potentially scared some of you off; lol, sorry!!), I'd still love for as many of you as possible to join this year's novena. Please let me know by All Hallow's Eve (next Wednesday) so I can add you to the list of those participating, especially if you want to daily reminders. There are already a couple people signed up (even before I started writing this post) and I'm excited to see how many more will join this year!"

If you want detailed instructions on how to do the novena, I'll like my Epic Pew article (which has the instructions broken down for y'all) as soon as it goes up.

That's it from me for now. I have work deadlines and limited time to do them with my eyesight. By the way, that's one of my main intentions this year (if anyone wants to help Mom and I pray for it); for my overall health (which has been the worse it's been in years) and my eyesight -- that we get answers and that it gets better (and that I don't lose my eyesight).

I hope you all have a lovely rest of the week!

As always, thanks for reading and God bless! 😊

Posted by Melissa Cecilia at 12:50 PM No comments:

The Pachamama Controversy Straight from a Local Priest (Translation Inside)

Yes, I know. There is so much infighting over the Pachamama idols (yes, I'm calling them idols). Yes, I'm also sticking to the "Yo (Pacha)mama..." joke I made on Twitter earlier this week. Having said that, I'm not here to fight anyone. I know what the arguments are on both sides. I'm read and seen them. There is, however, something I want to add to the discussion... because we're clearly all adult enough to have civil discussions, right? Asking too much? Well, here's hoping a good dialogue can come of it.

I've translated the bold parts of a post by Fr. Nelson Medina  -- from Spanish into English -- on why the Pachamama idols are *not* part of the Amazonian Catholic culture. Or, at least, not the orthodox part or any part that he's witnessed. I did not translate the entire thing because I have no permission to do so (although, if Fr. Nelson lets me, I'd be more than happy to do it).

And, if you need some background information on Fr. Nelson: He's Colombian. He's from the area and has a lot of experience in this area (Amazon). He knows what he's talking about because he's lived and experienced it himself.

This is taken directly from his website. Again, I've mostly translated the bold parts, though I've added more of what he wrote in parenthesis to give the bold part context. I have not added any opinions of my own to this. I did add words to the 5th quote in parenthesis for the sake of context. Otherwise, all Fr. Nelson's words.

“I must say that the image that was taken to Rome is not representative of the Colombian Amazon nor, I believe, anywhere in the Amazon.”

“Such image does NOT represent anything ‘ancestral’ of Amazonian culture.”

“Whose idea was it to carve that image and give it the use we’re now learning, with the complicity or negligence of numerous authorities inside and outside the Vatican?"

“Taking it (image/idols) to that sacred site (Roman church) can only mean that it is considered to have religious significance.”

“(There is even more to ask: what other representations do we know of fertility? Since ancient times, pregnant women, women with broad hips and erect phalluses have been the representation of fertility in cultures that have not received the Gospel within them. So, what else does this Synod bring? The procession of the phallus? And where are they going to leave it?) Is that the best way to serve Amazonian cultures, which have as much right as we do to receive the entire Gospel in all its purity?”

Citing St. John Henry Newman on how pagan rituals have been sanctified by the adaption of/by the Church:
“(What Newman does not say, no doubt about the conciseness of his text, and what Tornielli voluntarily omits, is simple and crucial, and is summed up in a question:) What does the Church do with the pagan elements BEFORE incorporating them into its expression of Faith, whether it be doctrine or liturgy? (Examples: The Christians of that time, did they take the beautiful statues of Aphrodite and say, ‘Let us celebrate human love,’ and then put them in their basilicas? Did they take the clothes of the Romans and said without more: ‘this is how our priests will dress’?)”

“(The Christian dynamic is very different, and St. Augustine explained it well: ‘Accedit verbum ad elementum et fit sacramentum.’) It is the integration into Christian preaching, when it is possible and logical… once it acquires a different sense of the pagan sense, that it is used in the Church. (And there is something interesting with which we can conclude: in Newman's long list there is not a single case of human images. Newman was interested in how some acts, stories or objects, relatively neutral in themselves, can be transformed into their meaning and used in the Church. The images designed for the Amazonian Synod have nothing of that neutrality:) celebrating ‘life’ without worshiping God, the only Creator, is simple paganism. (And with the pagan idols, whether it be the golden calf or the merchant’s money in the temple of Jerusalem, firm and clear actions are needed ... that can reach all the way to the Tiber.”

There you have it. Again, if I get Fr. Nelson's permission, I can translate the whole thing. You can run the post through Google translate although some parts don't translate as well.

That's all I'm going to bring into this dialogue because I refuse to get involved in arguments.

I hope y'all have a great weekend and have a blessed Sunday tomorrow.

Posted by Melissa Cecilia at 12:41 PM No comments: 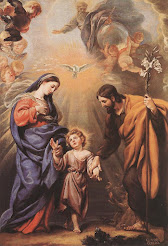